Along with the growing interest in heirloom vegetables and free-range meats and eggs, there is an increasing appreciation for how our ancestors grew and prepared their foods. Now with more knowledge about the importance of probiotics, there is a revival of interest in fermentation of vegetables. 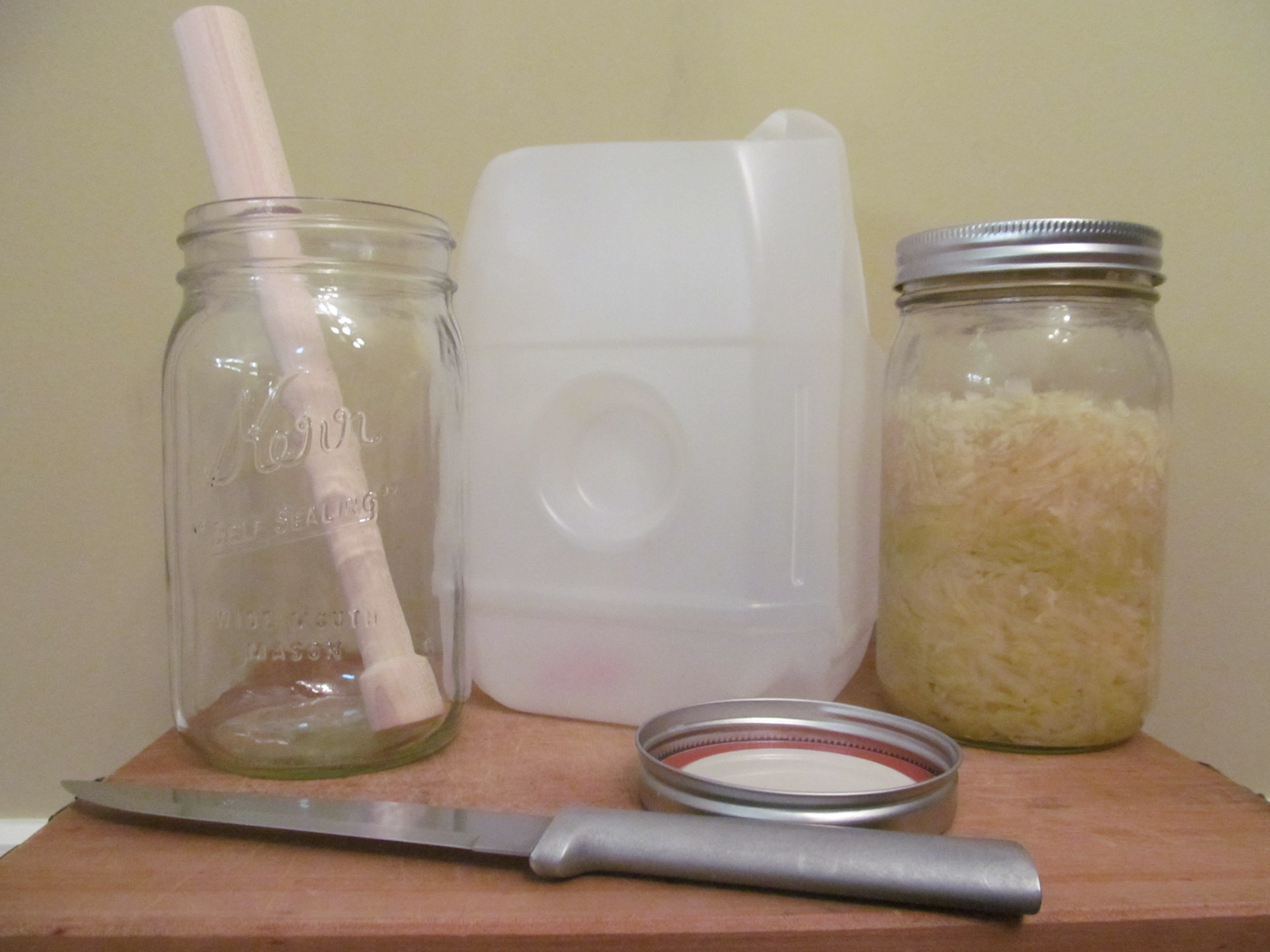 My southern grandmother gardened year-round and cooked many types of greens to serve with cornbread. She canned pepper and tomato relishes to use during the winter. My mid-western grandparents also grew lots of vegetables. They had a cellar to store root crops and cabbage for the longer and colder winters when the garden had been put to bed. Based on their ancestry, I am sure they made sauerkraut, but we have no surviving recipe. Perhaps it was so simple that no recipe was needed.

I was pleasantly surprised to find how easy it is to store a nice-sized cabbage in a quart jar. The only unusual tool pictured at left is a wooden stomper, which came with a food grinder. You will also need a large bowl, preferably glass, but stainless steel will do. A grater or slicer would be helpful also. The large white container in the center is my own invention and will be explained later.

If you have any paranoia about germs, please put that aside before you start. The first recipe I found said to sterilize the jar, then proceeded to describe how you should use a wide-mouth quart jar so you can use your hands to tightly compress the cabbage, forcing enough juice out of it to provide the brine. I decided to skip sterilization of the jar, since I cannot sterilize my hands. I had to assume that a process that has been used for thousands of years, and long before discovery of germs, did not really require sterilization of the containers.

The fact is that the bacteria which are naturally on the cabbage and on your skin provide the starter culture. You can add whey or other sources, but none are really required. Other than fresh cabbage, preferably organic, and a teaspoon of unrefined salt, no other ingredients are needed. I used Redmond Real Salt, which contains about 98% sodium chloride and 2% minerals. Extra minerals are beneficial for the microbes, especially if you have to add any filtered or distilled water which contain none. Although some do not require it, my recipe also called for a teaspoon of raw sugar. I used the natural sugar pictured because I had it on hand and it might also contain a bit of minerals.

I found that I could not compress the cabbage in the jar firmly enough by hand to cause juice to appear. So I resorted to the tamping stick which made it much easier. I did like using a wide mouth jar though, because it is easier to pack and also to get the sauerkraut out later.

Today I discovered a video that showed repeated tossing and squeezing of the thin-sliced vegetables in the bowl by hand, after sprinkling a teaspoon of salt over the top. It didn’t take long for a generous amount of liquid to appear, which was enough to cover the mixture when pressed into the jar.

My recipe said to add a little heated salt water if needed to bring the brine over the vegetables, leaving a half-inch of space at the top. Then it said to get out any air bubbles, put the lid on tightly, and put the jar in a container in the corner of the garage for six weeks. It warned that the lid could be tightened, but not loosened, and that there would be plenty of kraut odor. The container was to catch any liquid that might bubble out of the jar.

Since I didn’t have a garage and it was too cold outside for fermenting, I decided to keep the jar in the kitchen. Because of my concern that it might spew or otherwise become a nuisance, I fashioned a container from a plastic milk jug by cutting off the top with scissors, leaving the handle. The sealed jar fit into it perfectly, although it didn’t sit quite level. So I dropped the red plastic cap into the bottom to level the jar. No odor or other reaction was noticed, but after removing the jar from it’s temporary housing, there was a little residue in the bottom, showing that my effort was not wasted.

The beneficial bacteria thrive in a salty, anaerobic (without oxygen) environment and consume sugars. They overcome any bad microbes in the process. The resulting lactic acid culture is beneficial to our health.

The best surprise was that my sauerkraut is milder than any I have eaten. I have read that results may vary, even with the same ingredients, so I would need much more experience and experimentation to speak with any authority.

The most comforting advice was that we don’t have to worry about whether the fermented food is safe to eat. If any discoloration or froth appears on top, it can be dipped off and the rest should be fine. The smell will be noticeably offensive if it is not safe to eat. In that case it can be composted.

I am looking forward to making another batch with shredded carrots added and maybe a little garlic. I have read that onions are not recommended because they can get stronger and overcome all other flavors. I also want to try making my own whey for a starter culture. Most recipes I have seen lately list a much shorter ferment time than six weeks, so that would be nice also.

I may not find a recipe that everyone can agree on. But I would like to teach my grandchildren how to ferment their own vegetables. Since the health benefits are so great, everyone should know how to do it. This is one tradition that deserves to be preserved.

After discovering the importance of microbes to our health and our very existence, we had to take a fresh look at the subject of fermenting vegetables. Gut flora is responsible for immunity and absorption of nutrients, and up to 90% of our immune defense is in our intestines.

Our ancestors used fermentation for preserving foods, long before canned goods appeared in the supermarket. The first thing I discovered is that canned sauerkraut is not the real thing. Food subjected to extreme heat in the canning process is dead and cannot possibly possess the attributes that are afforded by natural fermentation.

Our first exposure to real sauerkraut was by purchasing a refrigerated glass jar from a health food store. It had a crunchy fresh taste, but was almost as sour as the canned type. The only ingredients were cabbage, water and salt, so I assume the lactic acid created the tartness. It should be used unheated, to protect the beneficial bacteria and vitamin C. The big surprise was the cost—over $5.00 for a 25 oz. jar.

We were advised to start out with very small servings of real sauerkraut each day. The beneficial microbes in large amounts could possibly cause a die-off of pathogenic bacteria, virus and fungi, releasing toxins which could cause temporary tiredness, rashes or headaches. We had no problems with it and quickly got accustomed to the taste.

The role of beneficial microbes:

• Rid the body of toxins, including heavy metals
• Enable the gut to produce more serotonin than the brain, benefiting mood
• Improve bowel function
• Increase immunity to illnesses and environmental allergies
• Decrease plaque formation on teeth
• Improve appearance of hair and skin
• Restore the balance of the body if antibiotics must be used

If you would like to learn more about the importance of gut flora, here is an informative 25-minute video by Health Coach Summer Bock: Creating a Thriving Intestinal Ecology.

Also, here is an informative article by Dr. Joseph Mercola: How to Easily and Inexpensively Ferment your own Vegetables.

Part 3 will be about our first experiment with making sauerkraut.

This is an excerpt from my book, “How to Stop Colds, Allergies & More.”

In 2003 I was introduced to the Soil Food Web at a native plant conference. For most of my life, gardening organically just meant using compost and mulch, and avoiding poisons and chemicals. But here on a big screen was the whole story of what is going on beneath our feet—how a teaspoon of healthy soil is full of millions of microbes, including bacteria, fungi, and other critters that have a synergistic relationship with the plants and provide nutrients in exchange for the sugars that plants make through photosynthesis. Everything eats something else, not all nematodes are bad, microbes also live inside the plants, and so forth.

We have always been told that plants don’t know the difference between natural or synthetic fertilizers, as if that somehow justifies the lifeless soils across our country. For more information about real soil, see the Soil Biology Primer, available through the online store of the Soil and Water Conservation Service.

Well, guess what, folks? The same applies to us! Only about 10% of the cells in our body are of human origin. The rest are bacteria, fungi, and who knows what else. While they represent far less than 90% of our weight, the roles they play in our existence are still being discovered and may never be fully understood. I know this might be shocking, if you have not heard it before–but just ask any microbiologist.

The next question is, what have we been doing to the fungus among us, not to mention the bacteria? Well, let’s see. Antibiotics kill bacteria, not all bacteria are bad, and the details of our synergistic existence are still being discovered.

For example, H. pylori was linked with stomach ulcers; so it has been widely eradicated with antibiotics. Now we are learning that it also has beneficial uses, like assisting hormones in the stomach that tell us when we are full. Could that be a little clue to some of our obesity problems? It also is believed to have a role in preventing esophageal cancer, asthma, and other conditions.  H. pylori is just one of many hundreds of species of bacteria that live in our gastrointestinal tract, most of which have not yet been identified, not to mention the numerous microbes that occupy other parts of our bodies.

In studying the soil food web, I learned that trees and perennials like fungi-dominated soils, while vegetables, annuals, and grasses prefer more bacteria. What do antibiotics do for the balance of fungi and bacteria in our bodies? I just know that antibiotics can have a negative effect on our digestion and are not appropriate for most chronic sinus infections, as mentioned above.

According to several health newsletters which I have received recently, our metabolic pathways are a series of chemical reactions our bodies perform to stay alive. Since the role that microbes play in our metabolic pathways is still unfolding, we really don’t know how many species of microbes may be critical to our existence. We can expect to hear a lot more about new discoveries regarding invisible friends and foes.

We have become almost obsessed with sterilizing our floors, hands, and even babies. Now we are learning that some of the healthiest children have been inoculated through mother’s milk, gradual introduction to grass and soil, etc. It is time to realize that not all bacteria are bad, and some are even beneficial. Antibacterial products are not the answer for everything.

Part 2 will include comments on an article by Dr. Joseph Mercola about fermenting your own vegetables and Part 3 will contain my recipe for the above photo.

I would like to hear your comments about fermenting vegetables.